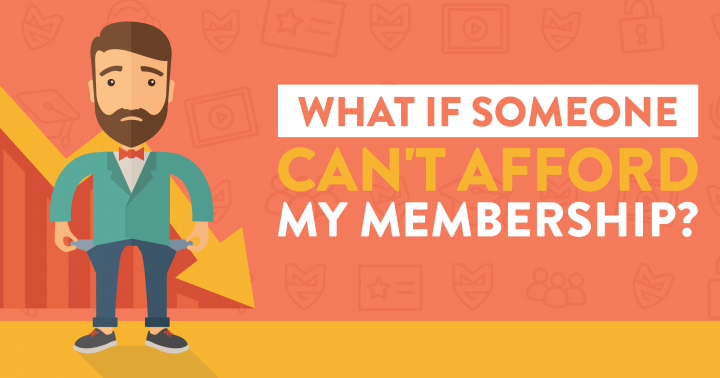 Has someone ever told you that they can’t afford your membership?

When a potential new member says “your price is too high” it might take every ounce of your will power to stop yourself from jumping to defend your pricing.

How could they possibly think your membership is too expensive?!

Do they not appreciate the value of being a member of your site?!

Before you say or do something you’ll probably regret, remember these few important points.

Firstly, not everyone will be able to afford your membership. It might be the most reasonably priced, greatest membership site to ever grace the planet and there will still be someone who thinks the price is too high.

Secondly, there are always chancers out there.  Most membership owners have been in the situation where someone catches you off guard by attempting to haggle your price down (if you haven’t yet, you likely will).

Here’s our top tips on how to react when someone tells you that they can’t afford your membership site:

Don’t read too much into the opinion of the minority

When a few people tell you that you’re overpriced, don’t read too much into it.

It doesn’t matter what business you’re in or what you sell, every single salesperson on the planet has heard that their prices are too high at one time or another.

Just because a select few share the same opinion about your prices, that doesn’t make it true.

Of course, if hundreds or even thousands of people are claiming you’re overpriced, this might be something you want to look into.

For the most part though, it’s just a few disgruntled people hoping to sway you on your prices.

Remember this – for as many people who think that your membership is overpriced, there’ll be just as many (or more) who think it’s an absolute bargain.

Despite the fact that the majority of your clients are perfectly happy with your site and prices, it’s easy to let the opinion of just one person carry far too much weight.

We end up tossing and turning over their words when we should be putting it into perspective.

So what if a few people think you’re too expensive? That’s not your problem.

Don’t let the thoughts of the minority convince you to uproot your entire pricing strategy.

Listen to what they have to say, thank them for their feedback and move on.

Remember this – for as many people who think that your membership is overpriced, there’ll be just as many (or more) who think it’s an absolute bargain.

Avoid the temptation to offer a discount

If someone tells you that they think you’re overpriced and your immediate solution is to solve the issue by offering them a special discount, hold your horses!

Successful membership sites aren’t built on a pile of discounts.

You’re running a business, not a Groupon mill. Avoid the temptation to change your prices or offer an exclusive deal just so you can convince one person to join your site.

I hate to be the one to break it to you but not everyone in this world is honest.

Some people will try their luck and go through the trouble of complaining about the price to try and save money.

The funny thing is that they might not even have an actual problem with your pricing, they’re just after a bargain.

You don’t owe them anything.

They might know how to write a stern email or complain to you over the phone or even in person about your prices, but you know how to run a business.

A better alternative to offering a discount is to offer a week or 14-day free trial for people who genuinely want to know if your membership is something that they’ll get true value from.

But whatever you do, don’t start rethinking the cost of your membership based on one or two pushy people.

A Lamborghini salesman wouldn’t reduce his prices for a person wanting to price-match a Ford Focus, and neither should you.

Focus on the value, not the cost

There’s a famous Oscar Wilde quote: “A cynic is a man who knows the price of everything but the value of nothing”.

I’m not sure Oscar was talking about membership site prices, but he makes a very good point!

If you’re getting too many people talking about the price, it’s time to reframe the perception and get people to focus on the value of your membership, not the cost.

Price isn’t based on logic, it’s all about value perception.

There’s no such thing as the “perfect price.”

You need to train the cynics who are focused only on price to think differently.

Try and limit the number of times someone comes to you complaining about the price of your membership by reframing things so that people focus on the value of joining your site and less on the cost.

To do this, make sure that you fully explain what a member will get when they join your membership.

What’s in it for them?

Reveal the positive changes that it can have including the problems it’ll help a member solve.

You want to make sure that the value of the membership makes the price irrelevant.

Related: How Do I Know That I'm Delivering Enough Value in My Membership?

Ask your audience questions like why do you want to join the membership? What problem do you need help solving? What are you hoping to gain from this membership?

Asking insightful questions like this helps to reframe the conversation and focuses it on the value of the membership rather than constantly talking about the cost.

If you’re getting too many people talking about the price, it’s time to reframe the perception and get people to focus on the value of your membership, not the cost.

A common misunderstanding around pricing is when people confuse the annual cost of the membership with the monthly fee.

To avoid this, make sure that the various joining options are clearly communicated to the potential client.

The last thing you want is for someone to think the annual cost is the monthly rate!

There’s no need to over complicate things if you don’t have to.

Never assume that someone is fully aware of all of the different joining options.

Related: Should I Charge Monthly or Annually for My Membership Site?

A great way to outline the different sign-up options is to point out the difference between your monthly and annual options.

Let them know that if they want to save money over time, the annual price is the one to go with.

On the other hand, if they’d rather pay for their membership monthly, then the monthly option will be more suitable.

Not everyone can afford your membership – but that’s okay!

Not everyone will be able to afford your membership and it’s unrealistic to think otherwise.

When someone backs out of joining your membership because of the cost, don’t take it personally.

Your site doesn’t have to be accessible to everyone.

Just because someone can’t afford to join, it doesn’t mean that your membership is worth any less.

Some people genuinely can’t join because of financial restrictions.

Their focus is probably going on other things and although they’d find a lot of value from your membership, joining isn’t a priority for them right now.

On the other hand, you might run into a few people who just don’t feel like paying what you’re charging.

These are the type of people that you probably don’t want to join your site anyway.

They don’t see the value in what you’re offering and let’s be honest, they’re not likely to be a good member anyway.

The next time somebody tells you that they can’t afford your membership, I hope these tips will prove to be useful.

Remember, just because one person thinks you’re overpriced, it doesn’t mean you should drop your prices to accommodate them.

Don’t hand out special offers and try to shift the conversation from one focused on the price to one that focuses on the true value of your membership.

Not everyone can join your membership, so don’t get too worked up about it.

As long as your membership is providing real value to members, it’ll keep attracting people willing to pay for it.