Should You Charge a Joining Fee for Your Membership? 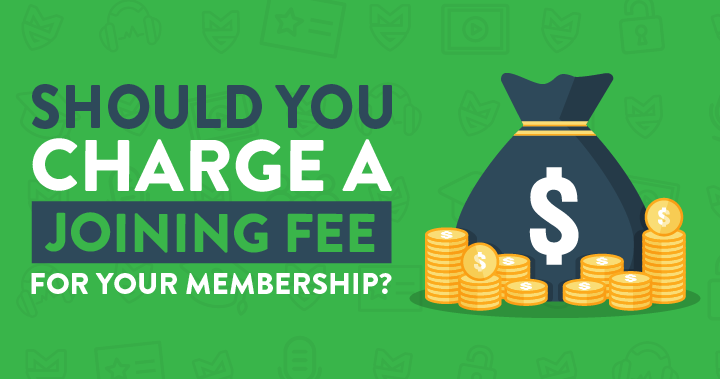 Not sure whether you should charge a joining fee for your membership?

A “joining fee” is a one-time extra charge that new members pay on top of their first subscription payment.

As a membership owner, this means extra cash in your pocket.

Surely that's a good thing, right? Well, not quite…

Personally, I’m not a huge fan of joining fees.

That’s not to say that they’re wrong or you shouldn’t have one.

I’m just saying that they aren’t for me and I’m going to tell you why in this post, along with a few situations when a joining fee may be necessary.

The main reason why I dislike joining fees is that the majority of people who charge them, do so as an arbitrary fee.

There’s no real reason, logic or justification behind their decision to charge a joining fee.

Oh, besides the fact that the person charging the fee wants some extra cash in their pocket!

In fact more often than not, the memberships that are charging joining fees are doing so to offset the fact they have terrible member retention.

They could fix this problem if they wanted to, but they don’t.

Instead of addressing the real issue of why people are leaving so soon, they tack a joining fee on the first monthly payment to get more money from their members.

Related: Attract Better Members Who Will Stick Around Long Term

So, the owner tries to make more money from you while they can.

The sad part about all of this is that they can get away with it and worst of all, they keep doing it.

Arbitrary joining fees that are there just to squeeze more money from you are, in my view, bad practice.

And typically these bad practices don't happen in isolation.

We find these type of memberships rarely have their members’ best interests at heart; and this is reflected in things like their cancellation processes, their refund policies and the overall quality of their offering.

People who charge a joining fee will often do so because they don’t like the idea of new members getting instant access to their entire back catalog.

If you own a membership site and you’re constantly adding new content, it’s usually stored in a library that your members can access.

That’s just part of the membership package, isn’t it?

However, some people don’t want to give members instant access ‘for nothing.’

Let’s say your membership has been trotting along for two years. That’s two years’ worth of content stored in your library.

Some membership owners will claim that this isn’t right or that it’s ‘unfair’ even.

So, they conclude that new members should be charged a joining fee as a type of compensation.

It’s backwards logic, I know. But it happens more than you might think.

What people with this mindset might not realize is that if you really don’t want new members to access your entire back catalog, there is a way around it.

That way, when a new member joins, you can make it so that they can only access the content that is published from their join date onwards.

Then, you can offer your back catalog as an extra bonus item for members to purchase.

Related: Use Upsells to Generate More Revenue from Your Membership Site

When is it appropriate to charge a joining fee?

Although there are many negative reasons why people charge joining fees, there are also legitimate situations where a joining fee is appropriate.

If you own a membership where it costs you time and/or money to onboard a new member, that may warrant you charging a joining fee.

For example, if new members require coaching, software, tools or a certain product to get them started after they join.

They’re all fair reasons to have a joining fee.

An example of when this type of circumstance comes into play is with certain memberships in industries like arts and crafts.

New members may be given a starter kit of some sort that includes tools to help them get started (such as yarn, thread, materials, etc.).

The added cost of buying those supplies and mailing them to new members warrants a joining fee because it cost you money and time to have those things ready to go.

I also think it’s justifiable to charge a joining fee if the fee itself is actually a bulk payment for extended or longer initial periods of the membership.

This usually happens when someone wants to pay for their first three, six or twelve months of membership upfront.

So, should you charge a joining fee for your membership?

While there are situations where a joining fee is justifiable and even necessary, if you don’t have a valid reason for having one, then don’t.

If the main reason you want a joining fee is to make some more money from your members and you’re not doing it for the right reasons, I don’t think it’s a good idea to charge a joining fee for your membership.

Pin down your idea and flesh out all the details of your membership, including the content you'll offer and the features you need, with our free planning workbook.