Should your membership site be evergreen or time-sensitive?

I’m frequently asked whether it’s better to keep the doors of your membership site or online course constantly open (known as an evergreen site) or whether you should employ an open/closed approach and restrict entry to just a few times a year (making it time-sensitive).

The truth is, there isn’t really any ‘best’ way and both are viable options. Which will work best for your site though depends on a number of factors, including the type of site, your audience and your own personal preference. However, there are a few pros and cons to each which are worth knowing about.

This model is great for:

With these kind of courses it benefits both you and your members to only allow access at certain times. And there’s no doubting that a time-sensitive approach can create some brilliant results. If it didn’t, why would Marie Forleo choose to open her, by now kind of famous, B-School only once a year, despite the fact that she could sell places year round if she wanted to?

Sites that only open and close their doors a certain number of times a year inherently offer something that evergreen sites don’t – the ability to create buzz and run a launch campaign each time you open the doors. And there’s something to be said for that – launch marketing can be a powerful aphrodisiac for buyers, especially when you incorporate things like early bird pricing and other launch strategies.

More importantly what this kind of approach provides is an inbuilt urgency, or scarcity, that makes people take action NOW. They have to make a decision about whether they want to buy your product because if they wait it will be too late. It’s a great approach for forcing action out of procrastinators!

However, I’ve seen an ever increasing amount of people selecting this approach just because of the scarcity element and because they fear no one would buy if there wasn’t any urgency to do so. Maybe there’s some truth in that, but there’s a lot of successful evergreen sites out there that would beg to differ, so don’t make your decision on this one fact alone.

It’s also worth bearing in mind that whilst you may see big names like David Siteman Garland and Marie Forleo operating on this basis and therefore think that it’s the way it should be done, in many of those cases there is a large existing audience and an army of affiliates who are essentially selling the product for them when they open the doors. If you’re just starting out, you’re unlikely to have either of those things and therefore can’t expect the same kind of results!

If there’s not an inherent reason, such as a live element, for your site to have the doors closed then it can also backfire and lead customers to go elsewhere. After all, there’s nothing more infuriating than when you think you’ve found the perfect course, only to discover that it's closed and you’re being asked to ‘put your email in here to be notified when we next open’.

As for when your cart is closed, well, there’s a certain satisfaction to watching your wait list grow and anticipating the flood of sales when you do open the doors again. Just think of all the money you’ll (hopefully) make! But wait, don’t forget an email address doesn’t equal a sale, and not everyone on your wait list will purchase when the time comes, especially if it is several months between openings (because something else new and shiny may have grabbed their attention by then). So, whilst you can get a nice pay day with a time-sensitive membership site, it helps to have a good list size and audience for that to be the case.

Which is why you can’t really sit on your laurels in between launches. You need to consistently work to build your authority and increase your reach so that your next launch will be even better than the last. Kimra Luna of Be True Brand You is a great example of this and has done incredibly well with her launches despite being an unknown entity just 18 months ago. How? Because in-between her course launches she has constantly given value and free content, and really nurtures her list and connections despite not having anything to ‘sell’ right now.

My plea to you if you run your site on an open/close cycle: when the cart is closed, don’t wait until the end of your sales page to tell people that, and definitely don’t only tell people when they click on your actual ‘buy now’ button! And let people know when you’re going to be re-opening again rather than a vague ‘we’ll let you know nearer the time’. I’m far more likely to sign-up to a waitlist if I know when to expect ‘the call’ so to speak.

If you’re only planning to open once or twice a year then state this clearly, and have some kind of email sequence in place to nurture those waitlist leads so that people are excited when your next launch comes around, rather than wondering who you are.

This model is great for:

As you might have guessed, the main positives of a time-sensitive site are the main downsides of an evergreen site – you can’t rely on launch marketing and you don’t have any inbuilt scarcity to prompt a decision. But that doesn’t mean that they can’t be successful, it just needs a different type of marketing and sales funnel. Scarcity can also be created in other ways, for example with special bonuses or flash sales.

The main pro of an evergreen site is that, with good marketing, you can have a steady stream of new members each month. That means a regular monthly income from the site, rather than just a nice pay day whenever you open the doors.

It also appeals to the ‘instant gratification’ folks out there who, like me, want to get started straight away when they’ve found something they like the look of. The bonus of this is also that your happy members can be constantly referring people to your site rather than saying, ‘I’m part of this great site you’d love but they’re not letting anyone in at the moment’.

An evergreen site is slightly easier to run on a technical level – essentially once your site is set up and accepting members you can just leave the tech side be. With a time-sensitive site then as well as creating a launch sequence each time, you may also need to reset your membership (or create a new membership level for each launch), especially for a course that starts on a specific date. However, a time-sensitive membership often requires your focus on members for a much shorter period of time than an evergreen site – although of course this will depend on your level of interaction and hands on support.

I'm personally a fan of evergreen sites as they cater more to the growing expectation for content to be on-demand. There's a reason why services like Netflix have become so popular and it's largely related to changes in how people want to consume content – we need to work with those changes and not against them. If I decide I want to learn how to knit or play the guitar, I want to sign up to something whilst I have that desire (which in itself is a kind of urgency – I want to learn this NOW). Similarly if I just want to join a community of other business owners for support, I'm going to look for somewhere I can join straight away, not in a few months time.

Having to wait to access something feels a little too much like following ‘old school' learning traditions that are no longer optimal for many people. The whole idea of having your course online is to give people the flexibility to learn as and when they want to in a way that works best for them, so enforcing arbitrary restrictions on this when it's not really necessary isn't always going to be the best idea. The exception being if you're offering a course with hands on instruction or a live component with everyone working through together, where the time-sensitive approach obviously makes more sense. So, make sure that you think about what's best for your audience and not just what you would prefer when making the decision about whether or not your site should be evergreen.

Many people may actually choose to initially open their membership site in a time-sensitive manner in order to get an initial influx of members going through the content before it reopens later as an evergreen site. This can be a valid and useful approach, especially if that initial opening is used essentially as a beta test for the site in order to check its viability and the response to the course material.

Whichever option you choose, make sure that the marketing plan for your site is created with this in mind as different strategies will work for both options. Also bear in mind that you can always change approach if you feel like things aren’t working – although it is slightly easier to go from a time-sensitive site to an evergreen one than vice versa.

Which option do you prefer and why? Let me know in the comments! 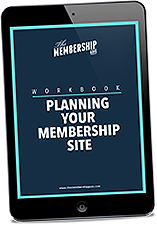 Pin down your idea and flesh out all the details of your membership site, including the content you'll offer and the features you'll need, with our free planning workbook.