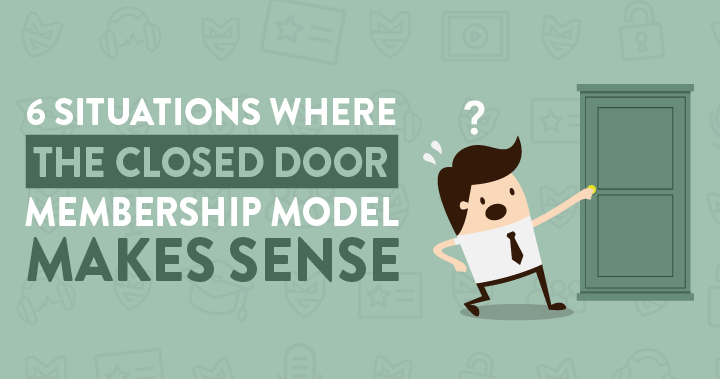 If you’ve been following us for a while, you’ll know that we are… let’s say skeptical about the value of closed door memberships (that is, only opening your membership for new members at set times).

We make no secret of our preference for the evergreen approach (letting members join at any time) and the vast majority of successful memberships in the world follow this model.

It’s not controversial to say an evergreen membership is preferable to a closed door one.

But (there’s always a but, isn’t there?) we don’t live in a world of absolutes.

There are some situations in which a closed door membership model is the smart choice and we would actually encourage you to give it a try.

Let’s take a look at the six situations when we think it’s sensible to shut the door and move away from the evergreen model.

The evergreen vs closed door debate

Before we go into those six situations, we want to note that we have covered the reasons why we don’t think too highly of the closed door model in the past.

If you’d like to hear our reasoning, then check out our blog post and podcast episode explaining 5 Reasons Why I Dislike the Closed Door Membership Launch Strategy.

So, we’re not going to take up too many characters on the pros vs. cons, and instead we’re going to focus on those times when the closed door model can be a good idea.

For memberships that are structured in these ways, a closed door model is absolutely the way to go.

If your product involved hands-on support or if you want to encourage students to work together, then it’s likely that your members function as a single cohort – they all start at the same time and progress at the same pace.

In this case, this is not just the right strategy, but essential.

If your course is based entirely on self-study, then a closed door approach is unnecessary.

But, if your model uses cohorts with a set intake of students and schedule, then the closed door model is an absolute must if you want it to be a success.

Whether it’s a single high-ticket mastermind group or a membership that consists of multiple mastermind groups, this model has to avoid continuous member turnover if you want it to go well.

The effectiveness of mastermind groups is dependent on its participants being as consistent as possible.

If your members are broken up into groups, they need to develop an understanding of their group and its members over a long-term period.

If you’re having people come and go at random, those groups will struggle to build momentum and struggle to succeed.

Do you run a membership based on…

All of these topics tend to be seasonal in nature, with timebound content, peaks and troughs of use and attention, and quiet seasons followed by busy periods.

If you know that the topic of your membership is seasonal, that you’re likely to have a low intake of members during a certain portion of the year, then you might think about closing the doors for that period so you can focus on other things.

In those natural downtimes, you can close your membership to new members and focus your time and energy on improvements to your site, the next influx of members, and just some simple membership housekeeping.

If you’ve been running your membership for a year or two and you know that there is a clearly-defined off-season period – where demand subsides and sales drop – then you might be better served by taking sales and marketing out of the equation for that period.

We have written before about Why You Should Run a Beta Test for Your Membership Site – and if you do run any kind of pre-launch test of your site, a closed door model is essential!

You might be running a traditional beta test, taking a small number of members specifically to stress test your membership and get feedback on what is effectively a working draft of your site.

Alternatively, your pilot program might be something like a ‘seed launch’ – popularized by Jeff Walker in his “Product Launch Formula” course and his book Launch.

The idea of a seed launch is creating a Minimum Viable Product version of your product.

A real barebones version that still delivers value, that you start selling to an initially small audience (aka your seed audience).

A seed launch validates your idea before you invest a lot of time and money into it.

We advocate the Lean Live Launch strategy, which is our version of an MVP launch.

Whichever way you approach it, if you’re testing your membership before a wider launch, you need to do it behind closed doors.

When your membership is a small part of your business

Marketing an evergreen membership is about consistency and the small things you do every day, whereas a closed door model requires a ring-fenced period of high-intensity activity.

If you know that you can only concentrate on your membership for a month or two of the year, but the rest of the time other parts of your business will take priority then the closed door model might suit you better.

This is also true for people who love working on a project-basis.

When your membership is just one part of your bigger business picture, running it on the basis of a fixed window lends naturally itself to the closed door model.

I don’t think it’s a secret that, when you see big names promoting the latest $2,000 course or expensive program, it’s because they’re getting a cut of the sales – usually 50%!

If you aren’t clued up on affiliate marketing, we’ve got you covered with our guide to Promoting Your Membership Site with an Affiliate Program.

There are plenty of “ifs” and “buts” to this point, which might rule a lot of people out from considering this point, but for high-ticket membership site owners who focus on affiliate marketing… a closed door membership model is a smart way forward.

The big affiliate pushes you see people doing, work best when it’s a concentrated promotion over a set period of time, not a casual year-round plug.

These affiliates set out a specific amount of time that they focus on selling your course, so a closed door model fits with the way affiliate marketing influencers work.

We are still firmly of the belief that evergreen memberships are the best choice almost every time for every person… but this post goes to show that it isn’t always black and white.

Something that holds true, whatever membership model you choose, is that you still need to show up for your existing members.

You can’t run a successful membership if you aren’t supporting your members with great content, presence, and expertise.

And regardless of whether your doors are open or closed – this is something that will never change!

Pin down your idea and flesh out all the details of your membership, including the content you'll offer and the features you need, with our free planning workbook.