7 Types of Members That Every Membership Site Has 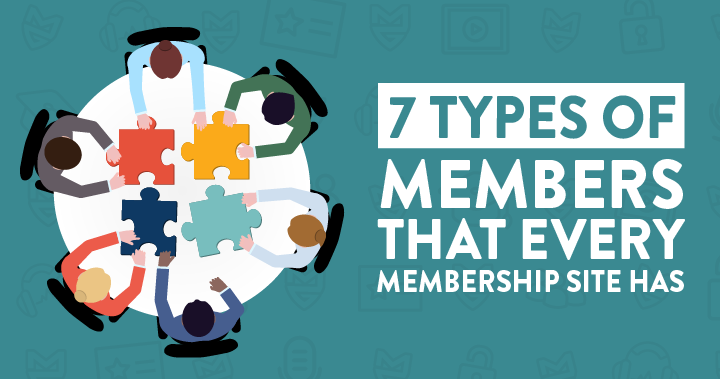 While every membership is unique, we all have our own idea of who our ‘perfect member’ is.

We can picture what they do for a living, their interests, hobbies, problems and so on; and often, we'll design our membership with these people in mind.

However the reality is that not everyone will fit into that one perfect bucket.

The longer you run your membership, the more you'll find that there are essentially seven main types of members out there.

(And if you don’t recognize all seven of these ‘member types’ yet, give it time!)

So, whether you’re thinking of starting a membership or you’ve been in the game for years, here’s the seven types of members you will see in every membership site:

Ah, the average Joe/Josephine – we love them, don’t we?

They don’t cause any hassle or complain a lot. They’re the salt of the earth type of member and we love them for it.

There’s nothing strikingly different or spectacular about this member and yet, the majority of your membership consists of them.

They’re the lifeblood of your membership.

They use the site the way that you intended it to be used. They spread positivity and contribute to the community a few times a week.

They’re the ‘average Joe’ type of member and we wouldn’t have a membership without them.

Related: How to Attract Better Members Who Will Stick Around Long Term

If this member could be compared to a superhero, it would be the Flash.

The Power User is always ‘on the ball.’

They’re a constant presence in your community and chances are, you know them by name (and you might even know their pet’s name too!).

They’re huge fans of the membership and log in a few times throughout the day.

They love to start conversations and lively debates. Being at the forefront of the discussion is where you’ll find them the most.

The Power User consumes every piece of content you release and if you wanted to hire a member as a moderator, this is the type of user who’s perfect for the job.

They’re usually the ones who will give you powerful testimonials and rave about your membership site to all of their friends.

Related: 5 Types of Content That Will Increase Member Engagement

You know those members who join your site and then you never hear from them again but they’re still around (somewhere)? – those are the Lurkers.

It’s not necessarily a bad thing to have a few of these members because they’re easy and low-maintenance.

They rarely contribute to the conversation, but they’re still consuming the content. They’ll read through discussions without ever participating.

They prefer to observe, and that’s okay.

A large portion of your members fall within the ‘lurker’ category.

They get a lot of value from your membership, but you’ll rarely (if ever) hear from them.

The Ghost is the member who started strong. You probably assumed they were Power Users in the beginning but then suddenly… they disappeared without a trace.

We've all been there…

They’re still paying you and opening emails and so on, but instead of engaging with the community like they used to, they stop.

It’s a strange occurrence and you’re not sure why they stopped and thus, they become ghosts in the community.

You might catch a few rare glimpses of them, but they won’t hang around long enough for you to be sure.

I can’t help but roll my eyes at this one.

This type of member will join your membership site, consume all of the content in a haste and then vanish.

They’re called ‘Hit and Runners’ for a reason!

They might stay for a month or two but during that time, they’re squeezing everything they can from your site, content and resources.

They’re often a thorn in the membership site owner’s side – because they just take what they can, and they leave.

The reason why they leave so suddenly varies.

Perhaps they can’t afford to keep up with the monthly fees or maybe they just downloaded everything they think they need, and they’re done with you now.

It’s annoying, but it happens.

Related: How to Prevent Hit and Run Members

The Frequent Flyer can be frustrating for membership owners because they come and go like the wind.

Six months later, they’re back again for another month before cancelling.

They repeat the process and never stay long enough to actually get to know you or anyone else in the community.

Since they’re always coming and going, it’s hard for them to get any real value from joining your membership because they’re not really giving it a chance.

What’s even more annoying about these members is when you spend a lot of time answering their questions and helping them out only to find that they’ve left again.

Then, they come back with the same questions and you have to repeat yourself.

They don’t make the commitment and dip in and out of your membership like it’s a box of chocolates – they’re your Frequent Flyer members.

The Back Pocketer is an enigma…

They join your membership and then they never log in.

They don’t consume your content and rarely open your emails.

However… they keep paying you.

What’s even stranger that if you reach out to them and remind them that they’re still paying you each month, but they never log in, they either don’t reply, or they do reply, and they say they’re fine with it.

It’s a strange one because they’re happy to continue paying for your membership despite not getting any use from it.

They’re keeping you snug in their back pocket.

You become a safety net or an insurance policy of sorts.

They keep paying you so that if and when the day comes that they need your help, you’re right there waiting for them.

Do you recognize any (or all) of these members?

Do you have a favorite? Or, maybe you’ve identified some other types of members?

If so, I’d love to hear from you! Stop by our free Facebook group and join the conversation.