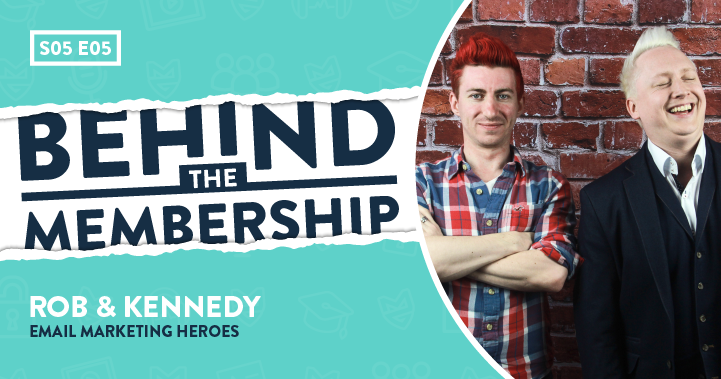 With a background in psychology, hypnosis, entertaining and influencing, Rob and Kennedy, owners of The League of Email Marketing Heroes are no strangers to the membership world.

In fact, they both run successful memberships for their diverse range of businesses.

In this week’s episode of Behind The Membership they’re sharing the story of The League, a membership that teaches entrepreneurs how to turn their marketing emails into profits using psychology.

During this episode they share how they’re taking ownership of the email marketing space, growing their membership successfully starting with little to no audience, why they choose to send psychology driven daily emails and how 95% of their member conversions come via email.

Plus they share how they manage their time effectively while running all of their businesses, why they’ve chosen not to adopt the closed-door enrolment model and how their top lead magnet isn’t actually a lead magnet… And much much more.

“I think for us one of the things I would definitely change was realizing why our members become members in the first place. I think if we could get into their brains a little bit deeper, we would never have put guest workshops in our membership because we realized people don't join our membership because they think of us as the curator, which is a great type of membership. But it's not what ours is. They come to us because they want to learn from the mind reader and the hypnotist about psychology driven email marketing.
.”

About Rob and Kennedy

Born in London before moving to Sunderland in the North East of England as a young child, Rob always wanted to be one of the cool kids. So he took up learning Magic as a hobby. Go Rob! Despite not understanding why this kept him from the popular tribe, he went on to win multiple awards as Young Magician of The Year at The Magic Circle.

After performing close up magic at weddings and children's parties he saw a hypnosis show and convinced his Dad to pay the hypnotist for mentorship. This lead Rob to moving to the Greek island of Kos for a number of summer seasons where he hypnotised and entertained thousands of tourists in his infamous shows.

Realising that these gigs won't keep knocking on his door, Rob decided to apply his skills to marketing himself which lead to him performing all over the world in places like The Seychelles and for events for royalty. While sitting around the pool waiting to perform, Rob started accepting offers from marketing companies and coaches to help them apply his skills to their businesses and quickly saw the results he was getting for them.

Refusing to do PE at school, Kennedy spent extra curricular time in anything and everything to do with the theatre. Amateur dramatics where he played parts in the likes of The Railway Children and Oliver meant that whenever there was a choice in school, he'd choose the theatre. His mother discovered his entrepreneurial flare when she emptied out his school trousers to find the 50p coins he'd been collecting from the other kids in exchange for writing excuse notes so they could skip. school. Naughty Kennedy.

After seeing someone on TV memorise a deck of cards, Kennedy became obsessed with the potential of our minds and this lead him to study influence, body language, micro-expressions, misdirection and memory. He combined these skills with his natural wit (or as his mother calls it, his ability to ‘think his way out of anything' into an after dinner show.

Since many of the clients who booked him were large corporations like Yahoo!, Mars, Tarmac and Royal London he spent a lot of time in departure lounges and hotel rooms waiting to perform. He used this time to coach other entertainers on how to grow their businesses by applying his skills to marketing.

“There’s no such thing as too many emails if the emails are good, and if people like receiving them.”